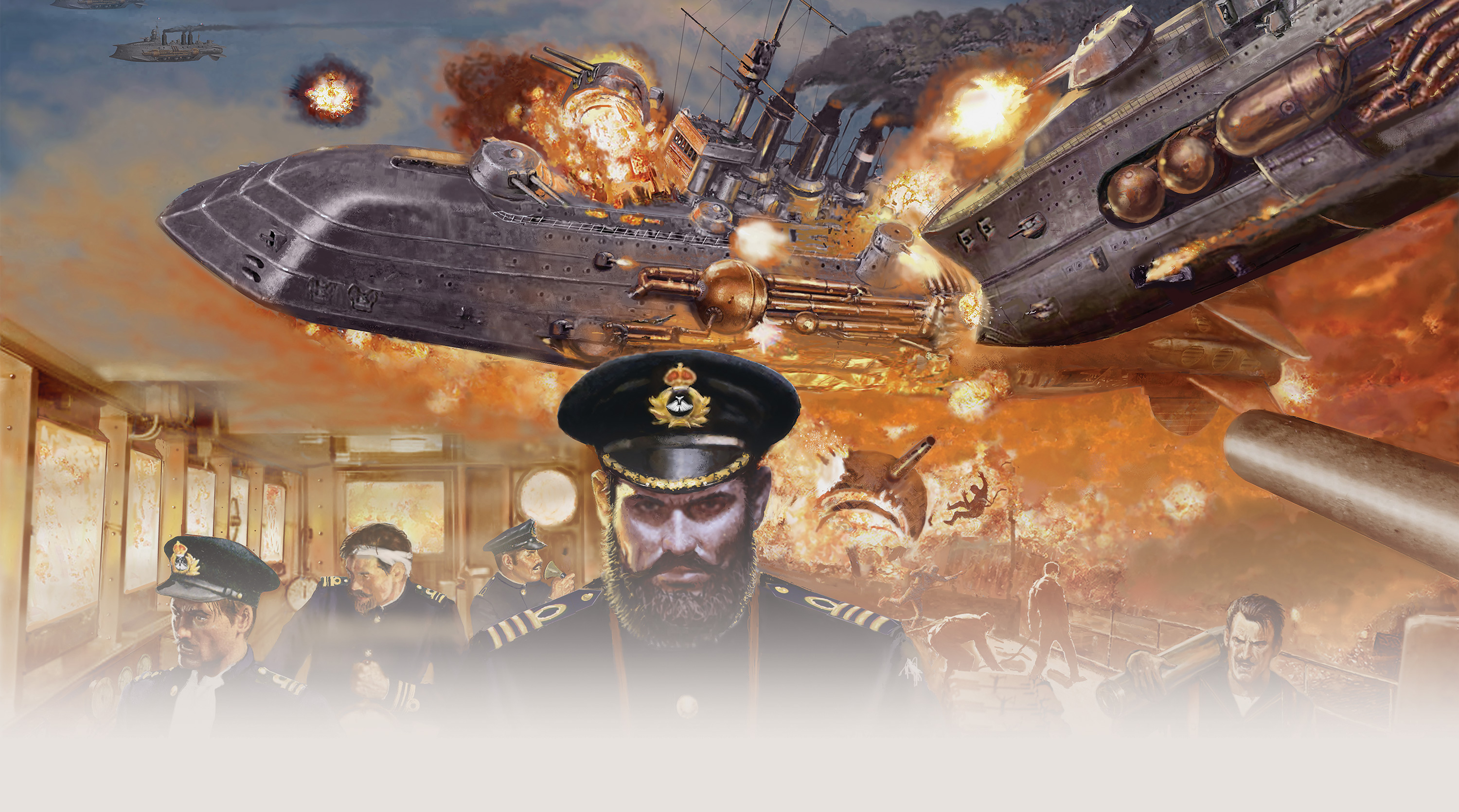 THE BATTLE OF AIR TITANS

In 1878 the Polish genius Rynchowski isolated an electrical fluid with remarkable lifting capabilities. A single, pivotal event that would change the world.

The smartest military minds of the coming generation—Zeppelin, Jellico, Fisher and others— diverted their attention to the glorious new technological revolution and sea-going battleships were abandoned around the world. In their place, armored giants took to the skies.

In 1906, Great Britain launched the HMS Leviathan, the first of the “super air ships”, sparking an arms race around the world. By 1910 the most powerful nations boasted large High Fleets, and the start of small skirmishes left the world uneasy…welcome to Leviathans!

The world of Leviathans is epic in scope. The Manifest Destiny of the 1800s, combined with Old World power and elites, mixes with new technologies that dazzle the imagination as man uses his ingenuity to conquer science and the world.

The art and fiction of Leviathans crafts a larger-than-life, alternate history image of clashing empires at the dawn of the technological age. Yet heroes still make the difference, whether in the palaces of far distant lands as political machinations bring a knife in the dark, or on the deck of a ship fighting for its life in a raging storm as hellfire from 12” gun batteries try to obliterate it from existence. 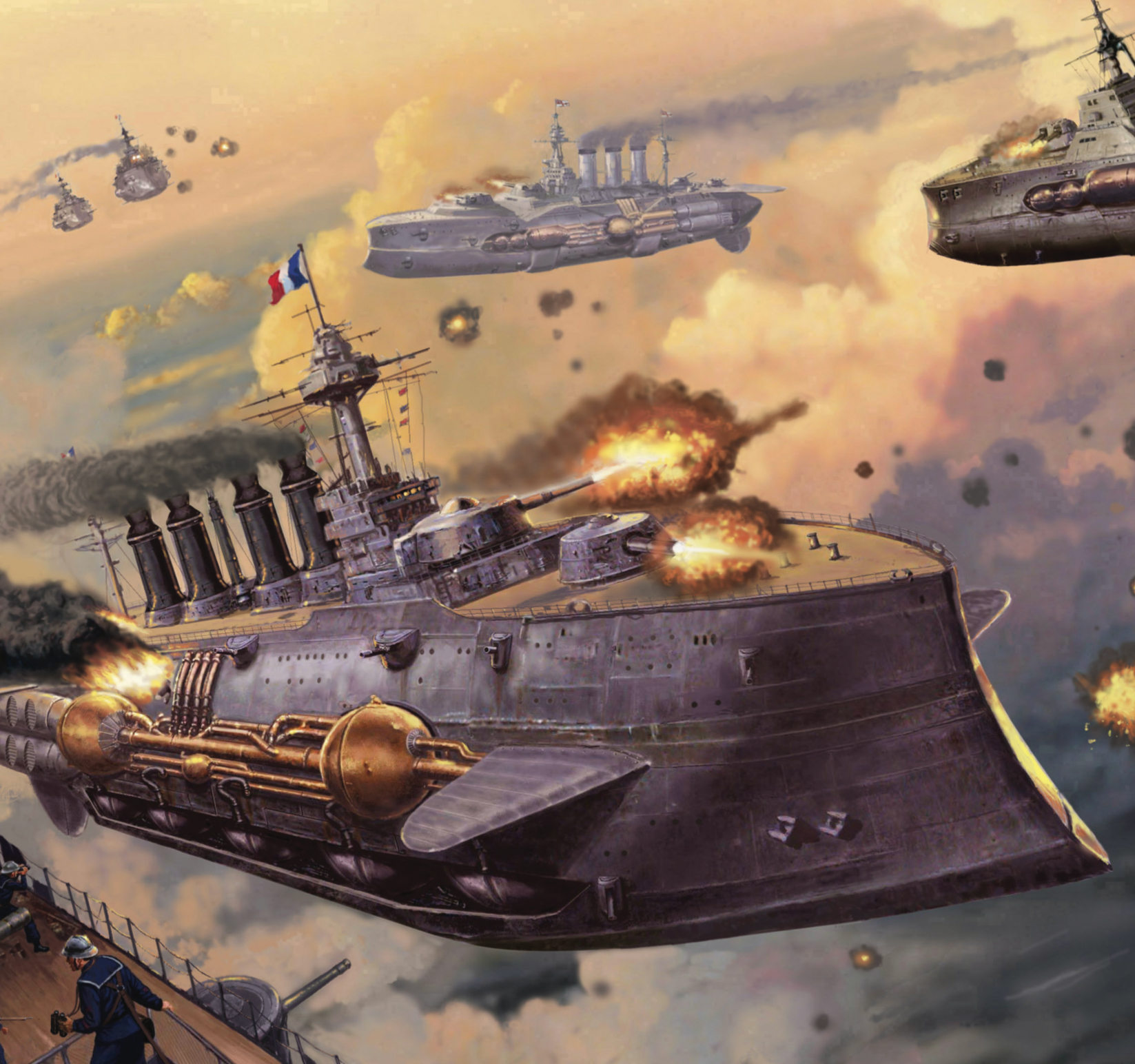 Giant steel-cased ships smashing their way through the air over cities, mountains and foreign ports. Static lightning halos thrown off a ship’s electroid ballast tanks when conducting high-powered maneuvers. A broken-keeled ship hanging just for a moment at the edge of the clouds, blazing with fire and lightning, which slowly rolls over and then plummets toward the barren desert floor…

The officers who must perfect three-dimensional naval warfare on ships that mount cutting edge 1910 technologies. The enlisted man who cuts his lanyard to dash across a pitching deck and rescue a comrade before he is lost over the side, the engineer who is almost as much a wizard as a tech.

Leviathans is a tabletop miniatures game that uses an innovative system of color-coded dice and easy-to-read physical record-keeping cards that allow for quick and easy play while retaining the depth of strategy that will encourage repeat play.

Originally published in 2012 to critical acclaim, the game has returned via Kickstarter. Advancing the timeline to the start of World War I, Leviathans: The Great War will unleash new factions, miniatures and more! 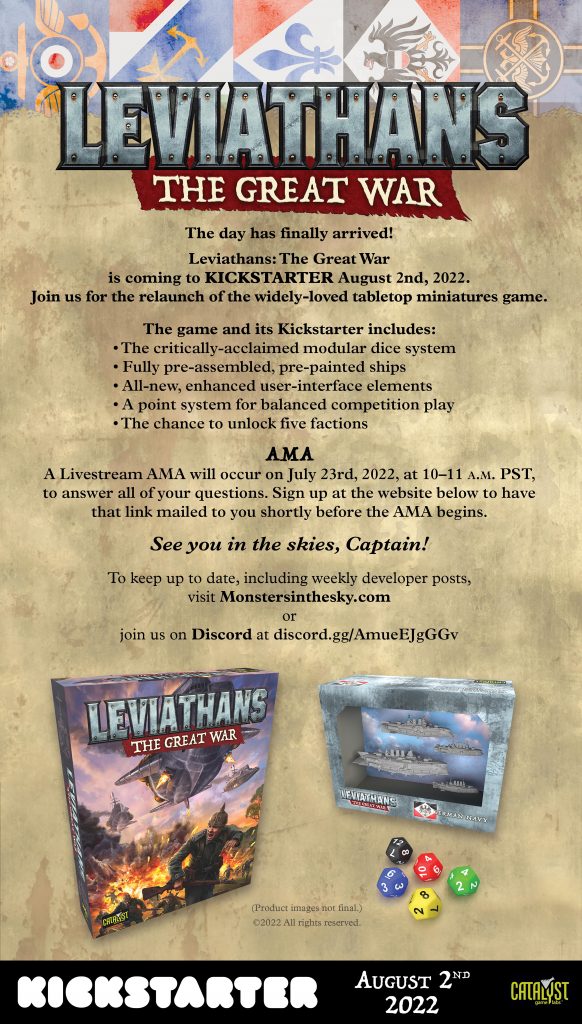 Stay up to date on the latest Leviathans news and releases